Uncover the hidden meaning behind the letter D and what its use in your name means for your personality. 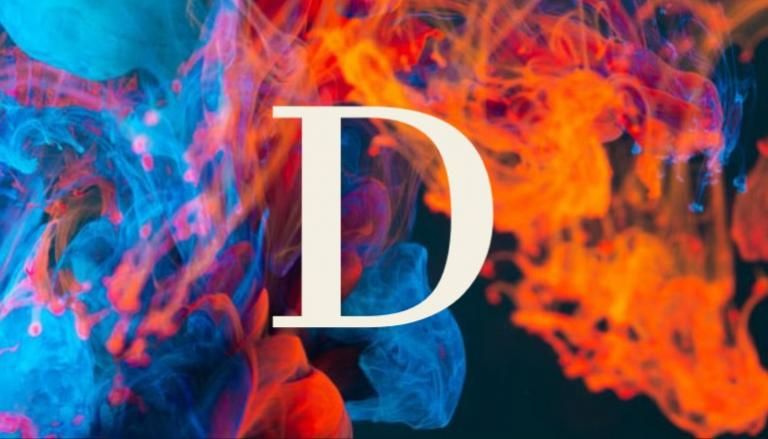 D is a letter with an energy representing security, pragmatism, focus, perseverance and will. People with D as the first letter in their name want security and have a methodical way of solving their problems.

They’re also determined to succeed and steadfast. In case a name has D as a last letter, those people are also methodical and very practical.

The history and symbolism of the letter D

Around the year 800 BC, the Phoenicians started to use the sound dalet for door, representing it as a triangle turned to the left side. The Greeks had delta, whereas the Romans thickened the lines of the triangle and added serifs, making the sign look like a semicircle as they have also softened it on one side.

Kabbalah uses the D word Dalet for door. D has the numeric value 4 in the Pythagorean theory, being called the Pythagorean Tetrad. Tetragrammaton, also known as Tetraktosm, represents God that can’t be in any ways described. The Tetragrammaton has 4 different aspects and has 10 days (10 being a perfect number), also the primary triad that is connected with the divine monad.

When personality is influenced by the letter D

D people are very good at giving others answers to their problems. Everyone wants to be in their surroundings because they give sound advice and are very empathetic, not to mention they always know what seems to be right.

They’re pragmatic and down-to-earth, knowing how to get things done and being determined to succeed in everything. What they should do is pay attention to their stubbornness.

When it comes to completing their projects, they do it fast and outshine others. These individuals know their purpose in life and are determined to fulfil it. They need strong foundations for their future and are hardworking.

Very intelligent, their judgment is always the right one. D in their name indicates they’re also intuitive, which means they can see things others usually ignore. It’s unlikely for them to ever look for the company of others because people are attracted to them. They have many friends and no idea why.

When it comes to business, they’re shrewd and knowledgeable, able to put their ideas into practice and productive. What they seem to do all the time is only what their heart wants. Determined to achieve their goals, they never give their projects up.

Talented and authoritative, they’re great leaders who know how to organize people and schedules. Many of them are also good advertisers. While others describe them as standoffs, they truly love other people and need to be surrounded by friends.

Negative D people are very stubborn and have a big ego. They also have the tendency to be melancholic and to not work hard when needed to. Furthermore, they’re suspicious and have many changing moods.

Other hidden meanings of D

When D appears every step of the way, it sends people the message they need to be more stubborn and to continue working on their projects because good things are ahead. They’re sure to have an easier life, especially if they change their reflections.

At the same time, they’re being told to let others learn their lessons on their own because, even if they may be very wise, their emotions surely aren’t on the right frequency.

Besides, they have a lot to learn themselves, not to mention others’ negativity can distract them from working hard on making their own dreams come true. They should focus on themselves if they want to achieve their goals.

Any disruption can unbalance their life, so they should move further without paying attention to the obstacles in their way and remaining strong. In case they happen to be dealing with matters of life and death, they should think of what they have to be grateful for.

Only gratitude will help them be more serene. This will bring their healing. After all, life is a circle and things that go around always come back around. They need to accept change and to let go of negativity, and their normal will become more positive.

When sending their good thoughts out in the Universe, good things will come back to them. They should keep in mind they’re the masters of their own faith and if they change, their life will change too.