Uncover the hidden meaning behind the letter C and what its use in your name means for your personality. 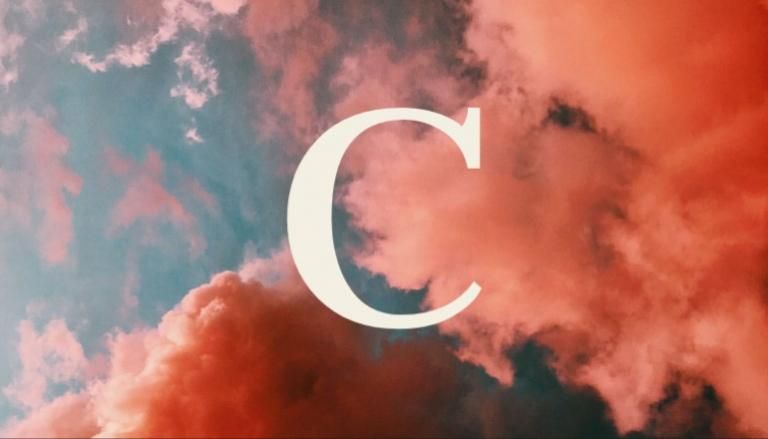 The letter C has an energy that resonates with self-expression, inspiring others, having a good sense of humor, being optimistic and understanding. People who have C as the first letter in their name are eager to express themselves, spontaneous and inspired.

Those with C at the end of their name are creative and need to be in the center of attention in order to flourish.

The history and symbolism of the letter C

C appeared in a form close to the present one in the Phoenician alphabet, standing for boomerang or a hunter’s stick. The Greeks took it and called it gamma.

In 500 BC, when they adopted the right to left reading, they flipped it. When the letter got to Italy, its shape started to be more crescent and to look as everyone knows it today.

C looks like a waning moon and is the third letter in many alphabets. It can represent the Magna Mater, which is the Great Mother. The Phoenicians used it with the letter G to sound like it does today.

The Mayans had it looking much like the Phoenicians did, an O in a triangle on the lower part, with the 2 triangles up. C is considered to be sacred because it’s the first letter in the name of Christ.

With time, its shape has changed and simplified, resembling the Cyrillic Л and eventually becoming the C of today. Like this it was also found in writings at the ruins of Troy. The Egyptians had it looking a lot with the Cyrillic Л, but added a horizontal line on its exterior, not like it was in the Cyrillic, with the line on the opposite side.

The Greeks represented it in the beginning with a triangular form and shorter, only to write it later as Г, whereas the Romans turned L and rounded it up until it became C.

When personality is influenced by the letter C

C people are always honest and rely on their instinct when having to discuss matters of the heart. They know how to express themselves and are very witty, so many want them at their parties. Their energy can’t be kept in one place, and they often express it by talking a lot.

When it comes to their sense of humor, this is highly appreciated, just like their openness to help others. Original and high-spirited, C people can make the most depressed individuals feel better because they’re cheerful and always have a good joke to tell.

They like to spoil themselves and the people they care about the most. Most of the time, their way of thinking is liberal, especially when it comes to spending and making money. They can adapt to any situation and have many talents, which means they usually manage to make their dreams come true.

The C men are good at fixing things around the house. Regardless if men or women, C people are good at public speaking because they have interesting things to say and are very eloquent. Because they’re good at organizing everything, many employers want them with their company.

It’s usual for them to always make sure everything is on place. This is why many of them are engineers or inventors. One of their flaws is their impatience. They tend to act on impulse, which can make them seem less in the eyes of others.

Negative Cs don’t respect any principle and are careless. They hurt people whenever they try to achieve something.

Other hidden meanings of C

C is also the symbol of being receptive and receiving new information. It resembles in share with a horseshoe, which happens to be a lucky charm.

Besides, it’s the first letter in Confidence, Clarity, Charity, Child, Component, Company and so on. If it appears all over the place and in dreams for some people, it’s asking for those individuals to check their relationships and to make sure the others find them as fun and enjoyable as they think to be.

In case they think they’re with their soulmate, it’s important for them to determine the level of compatibility with that person. At the same time, they shouldn’t be afraid to let go of a connection that’s detrimental for them.

They shouldn’t limit themselves in any manner, as this would only close their heart and mind. Being receptive is the key for them, also staying around people who resonate with their ideas and feelings.

C appearing in dreams may also ask people to receive the energy of the Universe because abundance is opening itself to them, so they should invest everything they have in obtaining it.

When it appears in the everyday life, C says to be more open to receive what the world has to offer, also with joy and delight.