Uncover the hidden meaning behind the letter B and what its use in your name means for your personality. 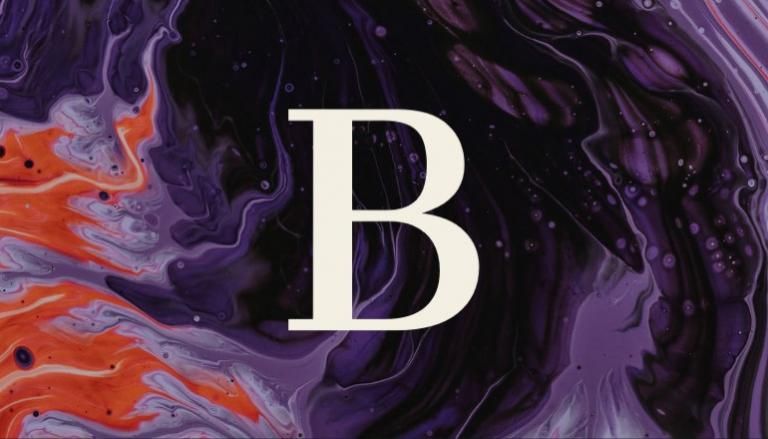 As far as the energy of the letter B goes, this is all about relationships and working in teams, intuition and diplomacy. People with B as their first letter in their name love collaborating with others and are perfect for teamwork.

In case B is the last letter in their name, they will get more done if they decide to cooperate as often as possible.

The history and symbolism of the letter B

4000 years back, in ancient Egypt, the letter B sounded like H and was flipped on its belly. Its meaning was shelter. It occupies the second position in both the English and Greek alphabet, where it’s denoted as Beta.

In the Hebrew alphabet, B is Beth and has the meaning of science, door of the church and mouth. In Cyrillic, B is Buki and has the 2 numerical value, representing an element from the creation of the world, also the plurality of every outset. B has Phoenician origins.

In the Arabic language is pronounced Ba, whereas the word Alif Ba (AB) in the Egyptian mythology was the spirit, its power and an element present in everything. Alchemists believed B is the representation of what holds the 4 main elements together, composing all things. This means B is a letter of diversity and difference.

The Slavs had it in the Beregynya tradition and was representing a woman living on riverbanks, who protected people from evil and had the ability to see the future. She was also a protector of children who were coming alone at the river.

Beregynya is the Mother Goddess of fertility and Earth, of everything that loves on the planet. She gives birth to all the souls that get reincarnated here and becomes alive when it’s the time to. Beregynya could also be Life and Death’s soul.

When personality is influenced by the letter B

B people are easy to influence and have very strong emotions. More than this, they want to do good for the entire world. They’re also introverted and very sensitive, compassionate and kind. What they want the most is to live in peace and to be happy.

Loyal to their friends almost to a fault, they need to keep their mind open and think of themselves too. They’re also friendly, good hosts and very sympathetic. Their friends love them for throwing the best parties.

If they need to recharge their batteries, they stay at home and enjoy the peace and quiet their nest is offering.

A B woman will mother the people in their life, even the pets she has. She’s submissive and doesn’t mind if others are making decisions for her. However, she’s not a martyr because she sacrifices her own good for the good of other very enthusiastically.

B men love spending their time in nature and usually live in the countryside. Both men and women with B in their name want to get married and to be with someone. They’re also very enthusiastic, which means they have highs and lows about anything.

Their opinions may be inflexible because they don’t accept to change their mind when it comes to what they believe in. This means they have a black and white way of thinking.

What they want the most is for things in their life to be balanced, so they think no one else knows better them how to achieve that balance. Stable and having a warm heart, they help those in need whenever they get the chance to.

Negative Bs are selfish and can’t think of other people. They’re fascinated by their own personalities and don’t care about the problems their loved ones may have.

What they do is complaining about themselves and saying their life is the worst. They seem to never have time for the people in their life. Aside from all this, they’re greedy, possessive and in need for attention.

Other hidden meanings of B

B represents connections, the ability to share one’s wisdom, wealth, knowledge and transmitting one’s own beliefs to the masses. B is also the first letter in Being, Billionaire, Bravery, Benevolence, Brain. Beauty and so on.

Since it looks a lot like 8, it’s strongly related to this number and its numerology meaning. B people should consider themselves lucky if they have the chance to speak to the world and bring their contribution to the betterment of their surroundings or perhaps, the entire humanity. The Universe sees them as givers, and not givers of wealth.

They should just share whatever they have the most of it, no matter what that may be, either love, compassion or good advice. What they should be aware of is the fact that money can’t buy love, friendship, intelligence or common sense.

It’s just a tool they could use to keep their home beautiful and to have a life in which they feel like they have plenty. Of course, money is necessary, but what would money be without love?

B usually appears as a confirmation for people to keep their thoughts focused on love. They shouldn’t forget about money either, but they should be aware of how love can do miracles.

At the same time, they shouldn’t look down on those who don’t have a good position in society or are inexperienced with life, as they were also like them. B also can appear as a prophecy when someone needs Divine help, announcing that help will arrive.

However, this help shouldn’t be used in the wrong way or for something negative because it will disappear. At the same time, the person who sees B repeatedly should respect wealth and the people who are giving him or her a hand.