The Life Path numerology offers precious and revealing insight into one’s personality in love and may come with answers as to why we behave the way we do. 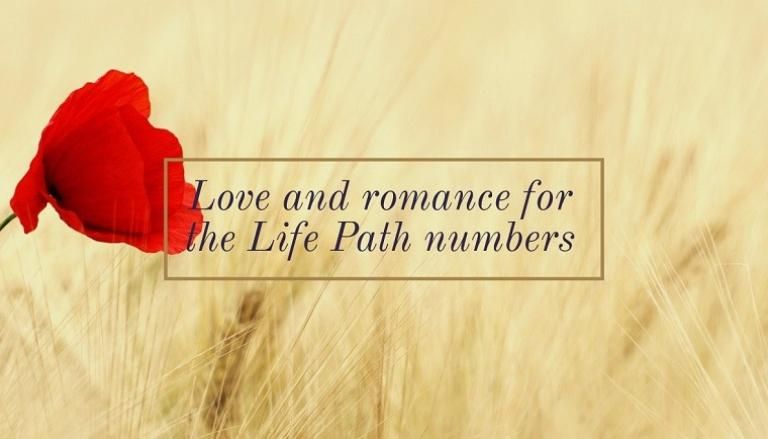 Whether in Numerology or outside of it, Love is a sensible subject to be taken into consideration with care for in a relationship one ought to be open about their true intentions and feelings.

Someone who understands, cares and aligns with another person’s needs is a keeper, while in the opposite scenario, things will break easily.

It is to be kept in mind that numerology isn’t a good match making method. While it can provide a glimpse into the compatibility of individuals, it can’t take into consideration the fact that all people are unique in their own right.

In the love equation, it is advised to use insight provided by both numerology as well as personal variables depending on the individual at hand.

Romance and the Life Path number 1

This number has a thing for being in the lead, as such, they will always choose the dominant role in a relationship.

This might arouse conflict if they engage in a commitment with someone that has the same wavelength of leadership as them. Nine out of ten struggles are due to the lack of compromise in a relationship.

Number one just can’t seem to let go of the reigns. The best suitors for number one are people that have the Life Path numbers three, five or six. These people are mostly adaptable and versatile.

Number three is the carefree individual that will bring the right type of comedy in number one’s life in order to take the edge off; five is basically Indiana Jones in this equation.

Adventure is right around the corner with this one; lastly, six is the number that brings balance to a number one individual, with their affectionate nature.

Love and the Life Path number 2

This individual has a tranquil character that makes him or her a born romantic. The equilibrium this person brings to the table is more than welcome in any relationship.

When the time is nigh for conflict, number two will have no problem evening the odds so that there won’t be an abrupt ending to the relationship.

Amity and intimacy are paramount in a commitment for number two. They yearn for intense, raw affection and love and make for the perfect partner.

They work best with a number eight, nine or another number two because these numbers are also deeply entangled in needs of spirituality and feelings and will aid number two in their quest for self-growth as all of them can be advantageous in their own unique ways to number two.

These people value positivism, happiness and originality, so a relationship that puts emphasis on these things is just the right thing for a number three.

Freedom of expressing one’s self is of great importance and is something they can’t sacrifice for anything. They can never promise themselves fully to someone due to their singularity complex.

Engaging in a relationship with a seven is highly advisable due to their empathetic and insightful nature.

They will enable number three to continue in their creative endeavors and guide them on the right path. Together they can make a rather harmonious relationship that could last for decades to come.

Romance and the Life Path number 4

Number four puts practicality and efficiency on high pedestals. However, this tends to push matters of love aside in the life of four.

They might have trouble finding a partner since their gestures aren’t those of a romantic extrovert. There won’t be any quiet, candlelit diners, romantic walks by the beach or any sort of grand symbols of love.

Their outlook on romance is the same one they have in general, rational and pragmatic. These people probably already have their mind set on what it is they need from a relationship before they even engage in searching for one.

The highest compatibility for number four is with a number one. They share the same drive and will motivate them in their mission. Once a number one commits to the relationship, they’re there to stay.

The Life Path number 5 in romance

These are sociable people. Extroverted and pleasant to the bone. This, together with their general attractiveness makes finding a partner rather easy for number five, however they have a tendency to avoid romance due to their insecurities.

Engaging in any sort of relationship too deeply might endanger the safety of their freedom they so cherish.

Once they get over this fear, they would easily fit well with a number one or a number seven.

These two paths resonate with number five. Number one being the diligent, passion driven individual that will always fight for their desires and number seven being the thoughtful, intelligent soul that exudes honesty.

Love and the Life Path number 6

These supportive, empathetic and gentle individuals encounter no issue when it comes to love.

Their almost psychic insight makes it easy for them to comply with the needs of their partners since they can read easily read others like an open book.

This makes it so that number six can pretty much engage in a successful relationship with any of the life path numbers. They provide a feeling of belonging to their partner.

While they can be with any of the other numbers, they are at their best with people with Life Paths of one or nine, due to their high compatibility.

Their nature will aid these two numbers in their endeavors and will bring forth a fruitful relationship.

The self-sufficient persona and desire to remain so, makes number seven a tough nut to crack.

These people avoid relationships due to their fear that they would stop being independent and also due to the fact that they aren’t the most extroverted of the bunch, quite opposite in fact.

While it is difficult for a seven to find true love, it is not impossible. Once they find a suitable partner, they can enjoy some of the most wholesome moments life has to offer.

Unlike others, living by themselves is not out of the question and might actually be something they actively seek.

Love and the Life Path number 8

The materialistic view of the world that number eight has will prove to be an impediment in their love life.

These people put too small of a price on matters of spirituality, as such they will find it difficult to find someone to build a lasting relationship with since they won’t see any use to it, other than taking advantage of whatever their partner might have to offer in order to accomplish their goal towards wealth.

Number eight doesn’t do this out of apathy, it is simply the way they are. The numbers that would make for this individual’s perfect partner are two and six, due to their empathy and overall affection and harmony that they exude.

Individuals with these Life Path numbers seem to have the most patience with the kind of issues that an eight would bring in a relationship.

Romance and the Life Path number 9

Usually, number nine people have had problematic pasts regarding romance, as such, most of these individuals tend to keep both people as well as relationships at bay.

While they can have affectionate entanglements, they always keep mostly to themselves. The best course of action is to be patient and let bygones be bygones.

Not everybody has it out for the number nine and someone will eventually appear that will shower this person with all the love and respect they deserve.

The best suitors for number nine are twos and sixes, seeing as how insightful and compassionate they can be. They are the best choices for the number nine to build a long-lasting commitment with and eventually even a home.